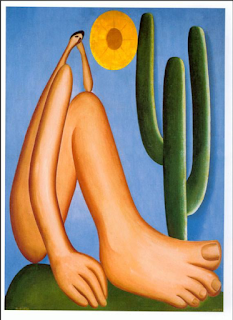 It is a great pleasure and also a great challenge to teach a course like this. Since the Wars of Independence, Latin America has seen dramatic changes in its political and social identity. The last century has been marked by a never-ending series of coup d’états, often times sponsored by U.S. governments, which have undermined democratic governments and their policies. In spite of this, Latin America has shown resilience and continues to advance a progressive agenda that strives to do away with social inequality. In this course, we will examine the history of the region, paying particular attention to major political changes and their repercussion in popular culture. The course is organized chronologically, but we will always strive to assess how past events mobilize social forces in the present.

The Hour of The Furnaces

For information about one of the filmmakers (Fernando "Pino" Solanas) follow this link:

Solanas’ first, and still most important feature, La hora de los hornos, had repercussions across Latin America and the world as a model of a politically militant cinema, by providing counter-information to contradict the long-established discourses that naturalised social inequalities and provided cover for elites who, in cooperation with foreign capital, exploited the lands and peoples of the continent. The film, in what Solanas dubbed a “cine-acto,” provokes the spectator to act through the use of cinema vérité and newsreel footage, interviews, shock montage and by interrupting itself to call for debate.

It was made during the authoritarian military government of Juan Carlos Onganía (not the more recent and notorious dictatorship), which waged repressive campaigns against universities and avant-garde culture (closing the Instituto Di Tella, center of experimentation in the visual arts, and prohibiting the opera Bomarzo, by Alberto Ginastera, and Pier Paolo Pasolini’s 1968 film Teorema), but during which the opposition sectors previously in conflict which each other were unifying under the banner of Peronism. Made clandestinely, La hora de los hornos documents both the “quotidian violence” of social injustice and the repressive violence that enforces it. But its radicality lies in its move beyond documentation into the sphere of militant agitation, the challenge it issues to the passive spectator through its conception of the “cine-acto,” inspired by, among others, Frantz Fanon’s pronouncement that “every spectator is a coward or a traitor.” Screenings were also carried out in clandestinely, with space opened for debate, and provocations built into the screening. These tactics were designed to directly mobilise the masses, but also addressed the middle-class intellectual, or as Solanas said in 1969, “the imperious necessity for the militant intelligentsia to root itself in Argentine reality and to contribute to the process of internal liberation of the movement of the masses.” (2)

The film has three parts. In the first, “Neocolonialism and Violence,” 16-millimeter footage filmed in factories, mines and cane fields is seen as a voiceover provides statistics. This material, shot by Solanas and Getino, is often recreated, acted out for the camera, as are the voices of the oligarchy, by which the cattle-breeding landowners are portrayed as culturally alienated, considering themselves more European than Argentine. These images are accompanied at times by a driving percussive soundtrack composed by Solanas, and at others by pop music that creates an ironic counterpoint to the image, a “détournement” of cosmopolitan pop culture, of which the most well-known sequence inter-cuts graphic slaughterhouse footage with print advertisements showing a superficial and oblivious bourgeoisie.

The second part lays out the populist historical revision, employing archival footage to present October 17 and Perón as “expressions of the people,” and, in the grand ideological shift of the time, precursors of the Marxist-inspired liberation struggles of the 1960s. This reconciliation of two previously incompatible revolutions—that of Perón (who persecuted the Argentine communists during his presidency) with that of Che Guevara—is a central imperative of the film, the third part of which consists of various calls for revolutionary violence.

Around the time of the making of La hora de los hornos, Solanas formed with Getino the Cine Liberación group, dedicated to, as their manifesto “Por un tercer cine” says, calling into question the prevalent models of “first cinema”—that of the industry, of which Argentina had a rich history—and “second cinema”—that of the auteur, which had momentarily flourished in Argentina in the early-1960s without establishing itself as a viable mode of filmmaking—and proposing a “third cinema” that is collective, formally experimental and above all politically militant. The manifesto addresses the problem of the passive cinemagoer by theorising the “film-act” as a “meeting” at which debate is given as much importance as the film itself.

With their next two films, Perón: la revolución justicialista (Perón: The Justicialist Revolution, 1971), and Perón: actualización doctrinaria para la toma del poder (Perón: Doctrinary Update for the Taking of Power, 1971), Solanas and Getino further explored Peronism’s potential contribution to the anticolonial struggle. The figure of Perón had retained its mythic power to inspire popular movements in Argentina, so Solanas and Getino set out to bring home images and the voice of the general for the first time since his overthrow. They interviewed Perón in Spain, where he was in exile, and put together two films in which they question the general on preselected themes, upon which he discourses with an impressive charisma and a surprising sense of humor. (3)

Each film has a very specific ideological design. In La revolución justicialista, directed at all Argentines, a casually dressed and relaxed Perón recounts a personal history of his first presidency. The film links Peronism and its popular appeal—facilitated by Perón’s revisionist account, based on easily graspable binaries such as that of the pueblo versus the oligarchy—to the leftist revolutionary struggles of the time. Actualización doctrinaria para la toma del poder specifically instructs members of the Peronist Movement how to rebuild its political machinery. The general, now more formally dressed, theorises on political systems, presents his own third position, and discusses his nationalist precursors, as his young wife Isabel sits mutely to his right. He was at that time becoming increasingly active, pulling the strings back in Argentina that would lead to his return to the presidency in 1973, which he held for less than a year before dying, leaving the scarcely-qualified Isabel in power. During his presidency he split violently with his more revolutionary supporters, leaving a polarised Argentina that would soon sink into the notorious military dictatorship of 1976 to 1983.

Between 1973 and 1975 Solanas, now without Getino, made what he called an “epic of the Argentine people,” the Glauber Rocha-inspired fiction feature Los hijos de Fierro (first screened in 1978). It appropriates “El gaucho Martín Fierro”, the 1872 narrative poem by José Hernández that recounts the exploits of the outlaw gaucho who was later proclaimed a model of Argentine authenticity by revisionists both elitist and populist. By equating Fierro with Perón (and aided by a voiceover in the same octosyllabic payador verse as the source poem), Solanas mythologises the Peronist resistance while presenting in a more realist key his own historical moment, from the 1955 right-wing coup that ousted Perón until just before his return to power.


The structure of the film is borrowed loosely from the poem, and consists of three episodes. In the first, “la ida” (the departure), Fierro’s “sons” are workers who lead a factory takeover in solidarity with twelve firedcompañeros. When the police violently retake the factory the resistance passes into clandestinity. The workers/guerrillas are seen reading communiqués from Perón, making bombs, and finally captured and tortured. The title of the second episode, “el desierto” (the desert), metaphorically represents Perón’s long absence. During the wait for his return, day-to-day family conflicts, union intrigues and other dangers divide thepueblo. The voice of Vizcacha—a malevolent character from “El gaucho Martín Fierro”—advises individualism and corruption, as the union is reduced to gangsterism. The third section is “la vuelta” (the return), in which the Peronist popular struggle intensifies. Documentary footage of 1968 street battles (the Cordobazo student and worker uprisings) is seen. The pueblo unites in revolt, but state repression touches off an urban guerrilla “integral war,” to which the military responds with more repression, torture and executions.


While the film was being made, Argentina was undergoing a period of intense political violence, and when the military took power in 1976 Solanas was targeted by right-wing paramilitaries and went into exile. In France, he remained active with human rights groups, made the documentary Le regard des autres (1979), and began work on what would be the first film of the next phase of his career, Tangos, el exilio de Gardel.
Posted by Tomás Crowder-Taraborrelli at 5:18 PM No comments:

Posted by Tomás Crowder-Taraborrelli at 2:19 PM No comments: 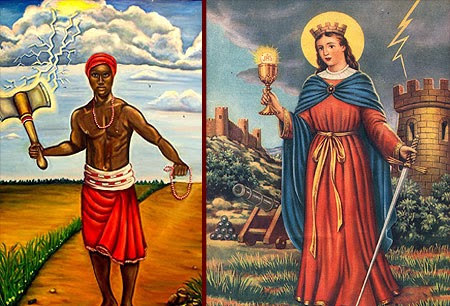 Blessed Santa Barbara
may my song for you take flight
and be inspired with feeling
before your beautiful image.
Long live Changó...!
With unbounded passion

I draw deep from my heart

praying that from heaven

you send us consolation

and your holy blessing.
Long live Changó...!
Posted by Tomás Crowder-Taraborrelli at 2:00 PM No comments:


Posted by Tomás Crowder-Taraborrelli at 11:06 AM No comments:

Posted by Tomás Crowder-Taraborrelli at 11:13 AM No comments: